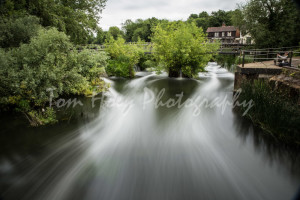 FROM the narrow boats on the Grand Union Canal, to the lakes at Aldenham, Stanborough and London Colney and the nature reserve at Rye Meads; from the locks on the Stort and the Lea to the slowly flowing stream of the New River; from the glistening springs at Ashwell to the bottle of Hadham Water on the shelves of your supermarket – you can’t travel far in our county without crossing, walking by, fishing in, bathing in, drinking, or just enjoying the waterways of Hertfordshire.
The major waterways of the county have played many different and important roles in the history of the area: the River Lea once defined the boundary between Viking Danelaw and Saxon England during the reign of Alfred the Great; the Grand Union Canal was one of this country’s major trade routes, flowing through the western half of the county on its way from the Thames at Brentford to the industrial heart of Birmingham; the Stort was a significant link in the transportation of grain and malt for Hertfordshire’s farming and brewing industries; the New River brings fresh water from springs near Ware all the way to London.